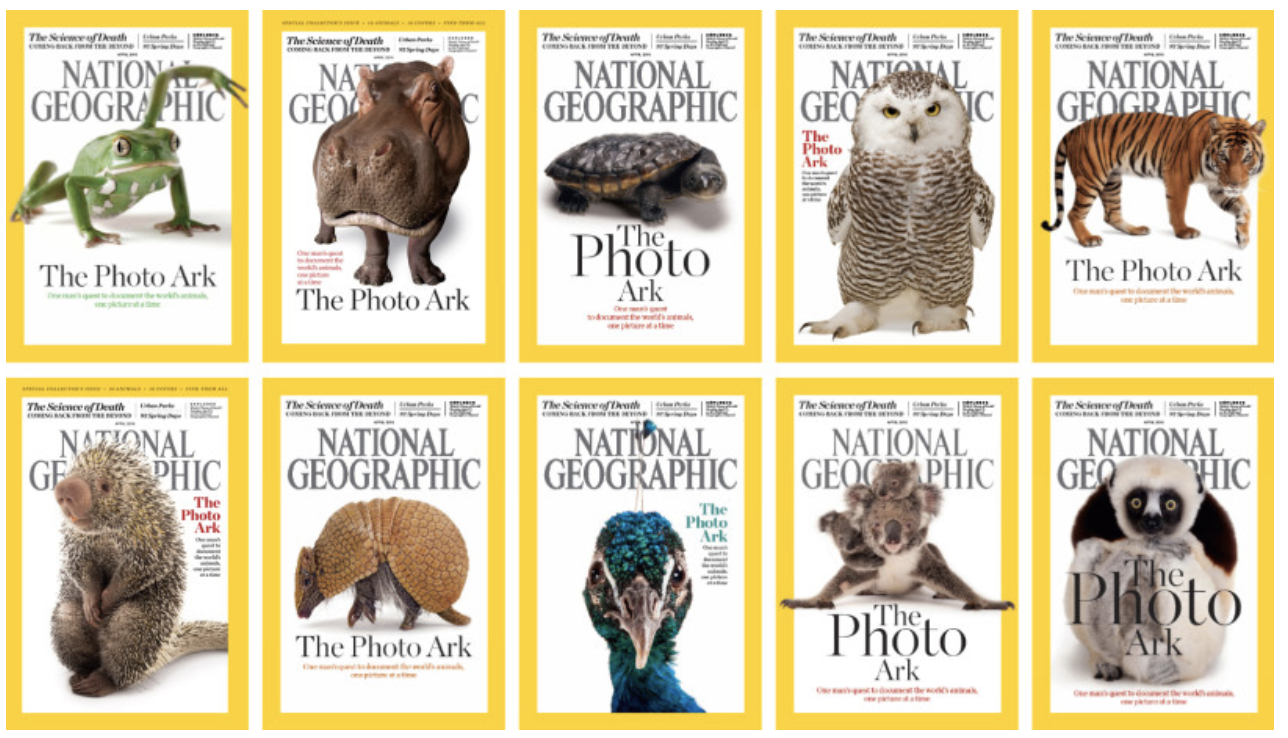 The April covers highlight the National Geographic Photo Ark project, a multiyear effort with Sartore to photograph all captive species and inspire people to save these animals before they disappear. For many of Earth’s creatures, time is running out. Species are disappearing at an alarming rate. To motivate people to care and help stop the crisis, Sartore is creating intimate portraits of an estimated 12,000 species of birds, fish, mammals, reptiles, amphibians and invertebrates. To date, he has photographed nearly 6,000 animals. Once completed, Photo Ark will serve as an important record of each animal’s existence and a powerful testament to the importance of saving them.

With so many animals to choose from, the magazine staff had a difficult time selecting the 10 to use on the covers.

“We wanted species diversity, from the charismatic and cute to the often overlooked. A mix of engaging characters that started to hint at the scale of Joel’s project was key,” says Susan Goldberg, National Geographic Partners editorial director and National Geographic magazine editor in chief.

Adds Emmet Smith, National Geographic Partners creative director: “Eye contact was key, as one of the hallmarks of the Photo Ark is creating a direct connection between the viewer and the animal.”

Published alongside the story is an extensive photo gallery of Sartore’s portraits and a new interactive that asks readers questions to allow them to discover which of the 10 cover animals they are most like. The “What Animal Is Most Like You?” quiz will feature questions such as, “Do you like warm weather, or snow? Are you a night owl or do you just like to sleep all the time?” The quiz, which will be published at www.natgeo.com/animalquiz, will let readers find out what animal most closely matches their own behavior while learning about the species on the covers. At the end of the quiz, readers can choose to download their animal’s wallpaper.

National Geographic magazine’s “What Animal Is Most Like You?” interactive quiz: www.natgeo.com/animalquiz