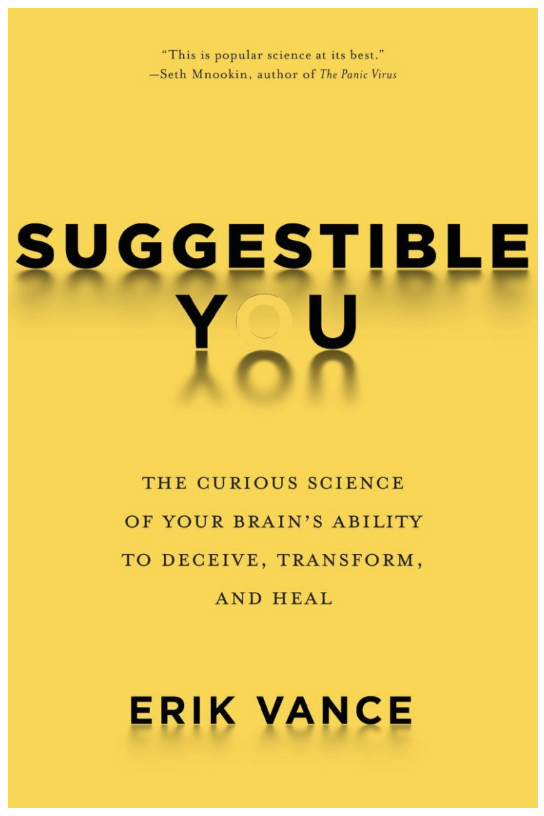 What you believe has literal, biological, quantifiable—in other words, real in every way—effects on your body and overall health.

Award-winning science writer Erik Vance plumbs the depths of our mind-body relationship in SUGGESTIBLE YOU: The Curious Science of Your Brain’s Ability to Deceive, Transform, and Heal (National Geographic Books; on sale Nov. 8, 2016; ISBN 978-1-4262-1789-0; 228 pages; ), investigating what our brains can lead our bodies to achieve and considering the implications of that power. A fascinating excerpt on the subject will be the cover story of National Geographic magazine’s December issue.

A few facts from SUGGESTIBLE YOU:

In SUGGESTIBLE YOU—praised as “compelling” and “eye-opening” by Kirkus, and“inspired” by Publishers Weekly—Vance considers the incredible power of our minds from every angle. From the historical perspective (Plato was in favor of placebo to help patients) up through current cutting-edge research, Vance isn’t afraid to jump into the fray. In the course of his research, Vance attempted to become a hypnotist, was electrocuted, and chose to be cursed so a brujo (witch doctor) could work to remove it. His own upbringing as a Christian Scientist, a group that believes in prayer not medical intervention for healing, opens the book in dramatic fashion and offers a unique perspective and unexpected entry into the topic.

Through it all Vance does what the best communicators of science can do—presents compelling, complicated ideas in a clear voice full of the excitement of discovery.

Erik Vance is an award-winning science writer based in California and Mexico City. Raised as a Christian Scientist, he graduated with honors from the Christian Science school, Principia College, in 1999 with a degree in biology. After working as a scientist on research projects dealing with dolphin intelligence and coastal ecology, Vance became an educator and then an environmental consultant. In 2005, he attended UC Santa Cruz’s famed science communication program and discovered a passion for journalism. There he learned that only through compelling characters can stories touch and inspire us. Since then, Vance has built his career around science-based profiles of inspiring, dedicated or controversial figures in society. His work has appeared in Harper’s Magazine, The New York Times, The Utne Reader, Scientific American, and National Geographic. He is also a contributing editor at Discover magazine.