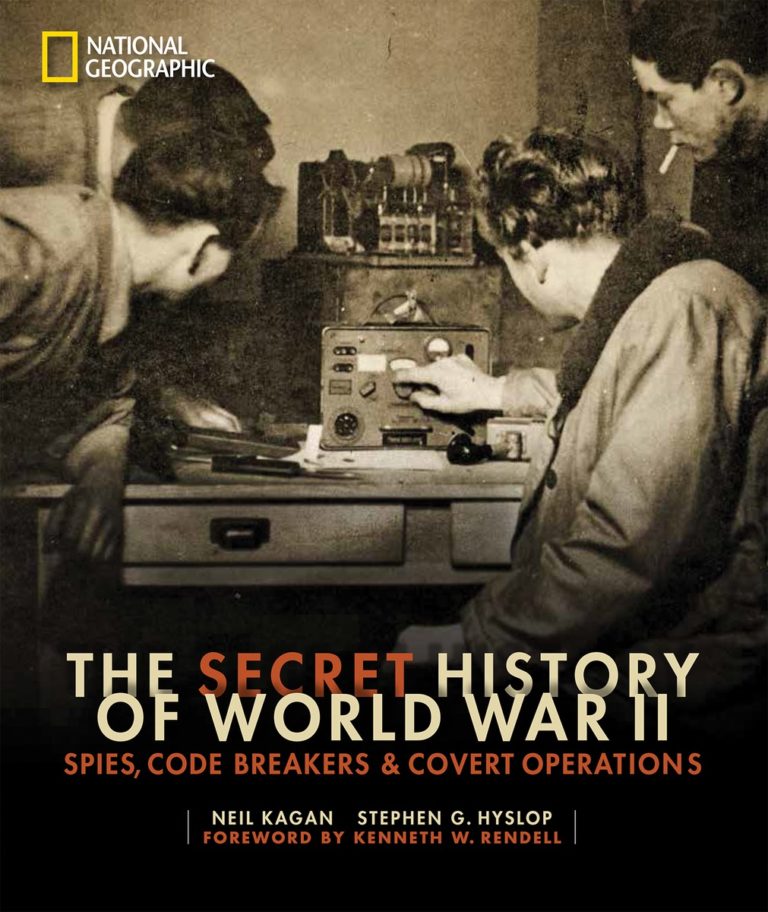 The great battles of World War II are well known but there was a secret war fought below the surface. Military operations shrouded in secrecy altered the conflict time and again, despite efforts by intelligence officials on all sides to discover what the enemy was up to. From spy missions to code breaking, THE SECRET HISTORY OF WORLD WAR II: SPIES, CODE BREAKERS, & COVERT OPERATIONS (National Geographic Books; ISBN: 978-1-4262-1701-2; on-sale date Oct. 25, 2016; ; hardcover) by Neil Kagan and Stephen G. Hyslop, is a richly illustrated account of these secret missions of World War II, which transports readers behind the battle lines and deep into the undercover war effort that changed the course of world history. From the authors who created Eyewitness to World War II and numerous other best-selling illustrated reference books, this is the shocking story behind the top-secret activity that shaped the outcome of the world’s greatest conflict—and the destiny of millions of people.

National Geographic’s landmark book illuminates World War II as never before by taking readers inside the secret lives of spies and spy masters; secret agents and secret armies; Enigma machines and code breakers; psychological warfare and black propaganda; and secret weapons and secret battle strategies. Each of the six heavily illustrated narrative chapters reveal the truth behind the deception that shaped the “secret war.” Six essays showcase hundreds of rare photos and artifacts (many never before seen) with more than 50 specially created sidebars that tell the stories of spies, double agents, war heroes, brave civilians and secret operations that include the likes of such notables as James Bond-creator Ian Fleming and songstress Josephine Baker, who were both spies for the Allies during the war. This provocative book documents the mosaic of covert life during the conflict and emphasizes that the war was personal and complex. Featured are over 700 rare artifacts and photographs from every country caught up in the struggle, from home fronts as well as battlefronts, including 240 secret weapons, documents, and devices from the collection of the Museum of World War II, Boston, such as:

Kagan and Hyslop reveal this little-known side of the war in captivating detail, weaving in extraordinary eyewitness accounts and information only recently declassified. With a foreword by Kenneth W. Rendell, the founder and executive director of the Museum of World War II, Boston, THE SECRET HISTORY OF WORLD WAR II is sure to be absorbing reading for military and history buffs.

NEIL KAGAN heads Kagan & Associates, Inc., a firm specializing in designing and producing innovative illustrated books. Formerly publisher/managing editor and director of new product development for Time-Life Books, Kagan created numerous book series, including the award-winning Voices of the Civil War. Recently he edited Great Battles of The Civil War, Great Photography of the Civil War, and for National Geographic, the best-selling books Concise History of the World, Eyewitness to the Civil War, The Untold Civil War, and Atlas of the Civil War.

STEPHEN G. HYSLOP has written several books on American history, including National Geographic’s Eyewitness to the Civil War and Atlas of the Civil War. A former writer and editor at Time-Life Books, Hyslop contributed to many volumes on the Second World War, including Great Photographs of World War II, Lightning War, and Barbarossa. His articles have appeared in American History, World War II, and The History Channel magazine.