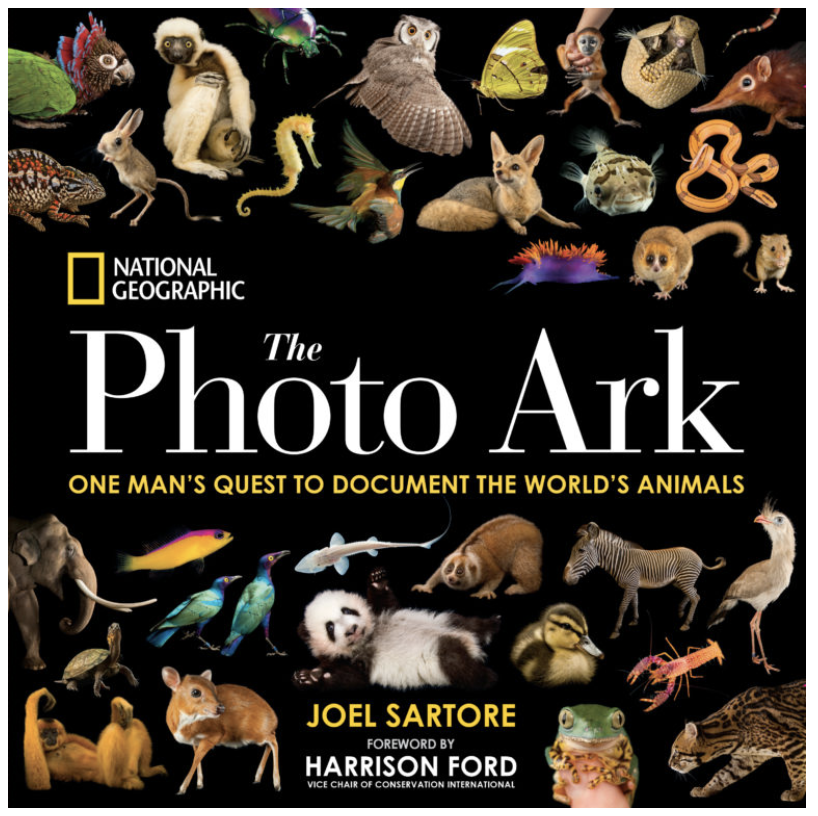 Half of all Earth’s species could go extinct by 2100. Joel Sartore—National Geographic Fellow, 25-year contributor to National Geographic magazine, and acclaimed photographer and author—is acutely aware of this devastating reality and is passionate about protecting our planet’s animals. He has made it his life’s work to raise awareness and provoke action—which is why he puts us eye to eye, wet nose to nose, and face to face with the fuzzy and feathered, soaring and slithering, with the magnificent and diverse life all around us.

“We owe it to these animals, as they struggle for survival on a human-dominated planet, to look them in the eye,” agrees bestselling author David Quammen. “Joel Sartore’s awestruck and awe-inspiring photos make that an experience of deep heart and beauty.”

Sartore circles the globe in his quest to photograph over 12,000 captive species and has already photographed more than 6,000, including:

And many, many more! The book embraces the theme of the ark as its organizing principle, beautifully pairing these intimate portraits of animals as partners, opposites, mirrors and sometimes in word play.

As Harrison Ford puts so well in the book’s foreword, THE PHOTO ARK “focuses a lens on the individual threads in nature’s tapestry.” The one-and-only Jane Goodall praises: “This is one of the most scientifically important—and artistically brilliant—books ever. You cannot see these sensitive portraits of the diversity of animals living on Planet Earth and not be entranced. And moved. And inspired to do all you can to ensure they stay with us.”

This spring, National Geographic is incredibly proud to publish THE PHOTO ARK as well as ANIMAL ARK, a children’s book with text by Newbery Medal-winner Kwame Alexander.

The goal of the National Geographic Photo Ark project is to inspire people to care for vulnerable species and to create an important record of existence for every animal in captivity. The project has already captured the world’s attention, with ten simultaneous covers of National Geographic magazine and photo projections on the United Nations and Empire State buildings, and St. Peter’s Cathedral in Rome. In 2017, Photo Ark exhibitions are opening at Omaha’s Henry Doorly Zoo, the Dallas Zoo and the Cincinnati Zoo. Learn more at NatGeoPhotoArk.org and join the conversation on social media with #SaveTogether.

JOEL SARTORE is a photographer, speaker, author, teacher and a 25-year contributor to National Geographic magazine as well as Audubon, Geo, Time, Life, Newsweek, and Sports Illustrated. He has written several books including National Geographic’s Rare: Portraits of America’s Endangered Species, Photographing Your Family, and Let’s Be Reasonable, a collection of essays from the CBS Sunday Morning show. Sartore and his work have been the subjects of several national broadcasts, including the National Geographic Channel’s Explorer, the NBC Nightly News, NPR’s Weekend Edition, and an hour-long PBS documentary, “At Close Range.” He is also a contributor on the CBS Sunday Morning Show with Charles Osgood.