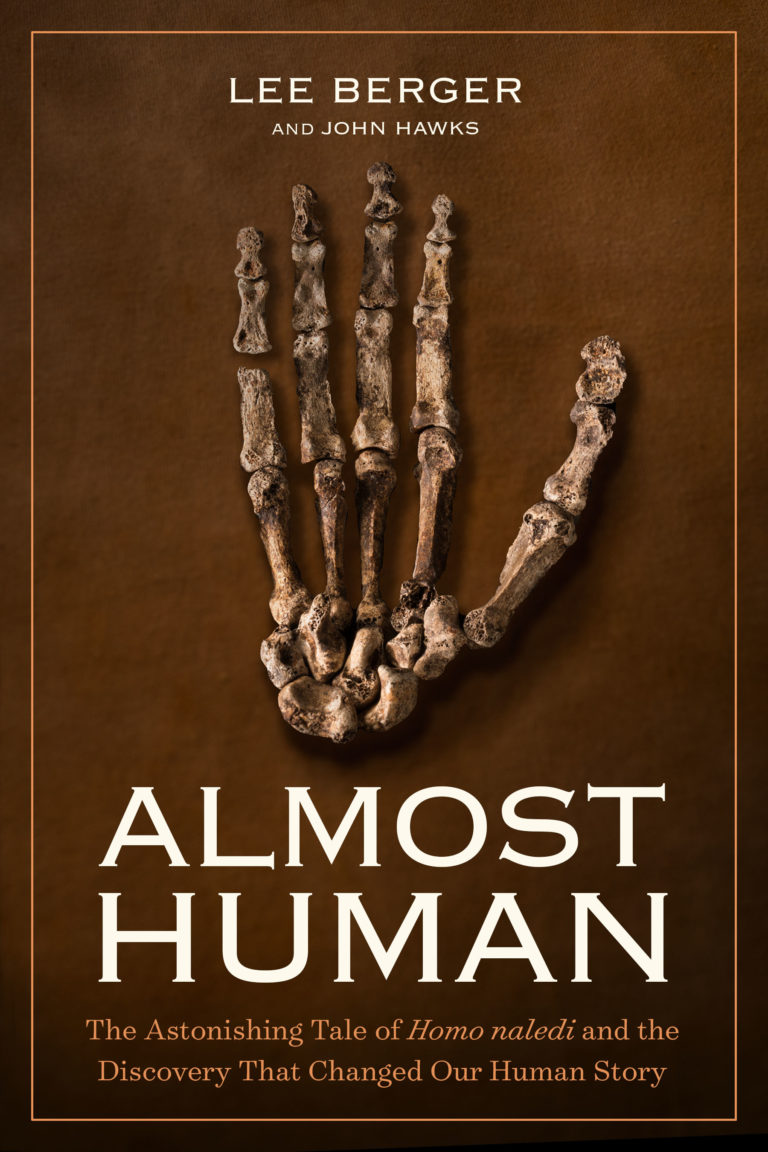 Lee Berger’s discovery of a new human ancestor, Homo naledi, changed our understanding of humanity’s history and made front-page news around the world. Berger’s new book, ALMOST HUMAN: The Astonishing Tale of Homo naledi and the Discovery That Changed Our Human Story (National Geographic; on sale May 9, 2017; ISBN 978-1-4262-1811-8; 240 pages; ) is the incredible first-person account of that discovery—written with co-author and collaborator John Hawks—and a behind-the-scenes look at Berger’s life’s work, culminating with the reveal of new scientific findings from his ongoing research:

The expectation had been 2 million years old – a huge surprise and the start of many fascinating questions: Could homo naledi have coexisted with our direct ancestors? Once upon a time, could its DNA have merged with our own?

** These findings and others will be published in the journal eLife under embargo on Tuesday, May 9.

In 2013, Lee Berger, a National Geographic Explorer-in-Residence and now a 2016 Time 100 Pioneer, put out a call around the world for petite collaborators, men and women of science small and adventurous enough to be able to squeeze through eight-inch tunnels to reach a sunless cave 40 feet underground. With this team of “underground astronauts,” Berger made the discovery of a lifetime: hundreds of prehistoric bones, including entire skeletons of at least 15 individuals. Their features combined those of known prehominids like Lucy, the famous Australopithecus, with those more human than anything ever before seen in prehistoric remains. Berger’s team had discovered the richest primitive hominid site ever and an all-new species, which they named Homo naledi.

These findings—from 2013 and 2017—are chockful of implications that shake the very foundation of how we define what makes us human. Did this species come before, during or after the emergence of Homo sapiens on our evolutionary tree? How did the caves come to contain nothing but the remains of these individuals? Did they bury their dead? If so, they must have had a level of self-knowledge, including an awareness of death. And yet those are the very characteristics used to define what makes us human. Did an equally advanced species inhabit Earth with us, or before us?

Berger does not hesitate to address all of these questions.

Lee Berger is the Research Professor in Human Origins and the Public Understanding of Science at the University of the Witwatersrand in Johannesburg, South Africa, and a National Geographic Explorer-in-Residence. He was a founder of the Palaeoanthropological Scientific Trust, today the largest nonprofit organization in Africa supporting research into human origins. The director of one of the largest paleontological projects in history, leading over 100 researchers in investigations of the Malapa site in South Africa, Berger is the author of more than 200 scholarly and popular works. His research has been featured three times on the cover of Science and has been named among the top 100 science stories of the year by Time, Scientific American and Discover magazine on numerous occasions. Berger has appeared in many television documentaries on subjects related to archaeology, paleoanthropology, and natural history, and has appeared widely on television and radio, including NPR’s Talk of the Nation, Morning Edition, and All Things Considered and PBS’s News Hour and Alan Alda’s Scientific American Frontiers. Berger was named one of Timemagazine’s 100 Most Influential People of 2015 and 2016’s Rolex National Geographic Explorer of the Year.