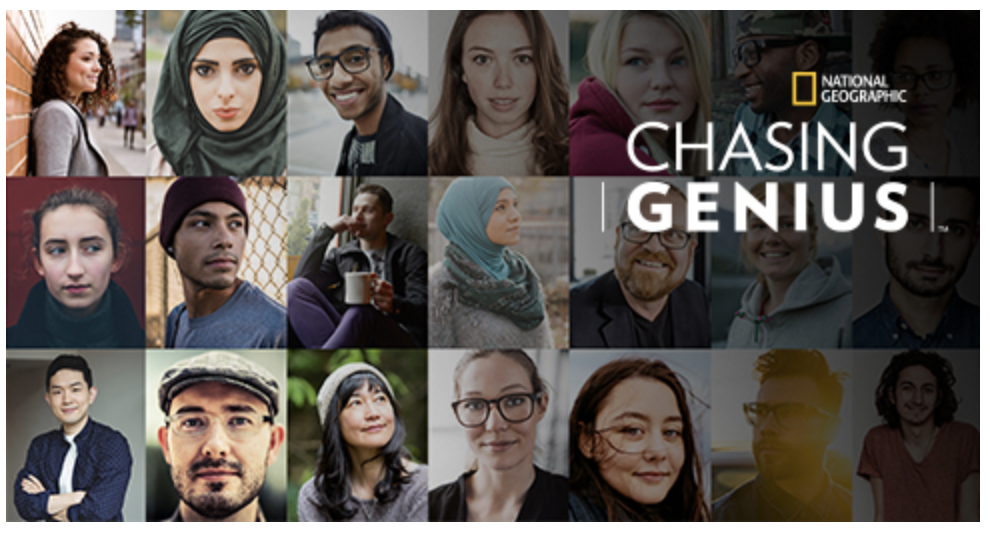 Based on the premise that transformative ideas can come from anywhere, and from anyone, National Geographic, along with partner GSK Consumer Healthcare, is introducing CHASING GENIUS, a global community that can help change the world. The Chasing Genius Challenge, a competition to find innovative ideas that address some of the world’s most critical issues, offers an incredible opportunity to provide real solutions by everyday people. Winners of the Chasing Genius Challenge will receive ,000 to expand upon their ideas, helping to further creative solutions toward positive global change.

Anyone with an idea that can help make the world a better place can learn more and apply today at www.natgeochasinggenius.com.

CHASING GENIUS s part of a broader, groundbreaking integrated partnership between National Geographic and GSK Consumer Healthcare, the makers of some of the world’s best loved health care brands including Sensodyne®, Flonase® Sensimist™ and Excedrin®, that spans premium programming, custom storytelling and consumer engagement designed to inspire consumers to tap into their inner genius.

Using #chasinggenius, National Geographic has crowdsourced ideas via the Chasing Genius platform, and identified issues that the global community is most passionate about. People will have the opportunity to tap their inner genius, and find out if their best ideas spark the genius required to help solve three of the most critical issues facing our world:

To enter, consumers are asked to create and submit one-minute videos describing their “genius” idea and the solution it provides to the CHASING GENIUS community. The submissions will be evaluated on the following criteria: innovation, creativity, viability and inspiration. Members of the Chasing Genius Council will help choose three winners at the end of the competition, one in each category. The general public will also have the opportunity to choose an additional “People’s Choice” winner through the CHASING GENIUS platform. The four winners will receive ,000 each to take their ideas further.

Each step of the journey can be experienced through www.natgeochasinggenius.com and across National Geographic’s social platforms. The deadline for submissions is July 31, 2017.

The CHASING GENIUS Council was curated to represent a mix of expertise and influence. Members include top scientists, entrepreneurs, storytellers, visionaries, explorers and creators who know what it means to think outside the box, and are driven by a passion and a purpose to make the world a better place:

A lifelong storyteller and passionate ocean explorer, Erika Bergman explores subsea environments as a submarine pilot. A National Geographic Young Explorer, she also co-founded a network of engineering camps for girls, expanding the corps of young explorers making a difference for the planet.

Susan Goldberg is an award-winning journalist and head of content at Nat Geo who is driven by the quest to tell great stories. Earning her stripes as a female journalist in the newspaper business, Susan can quickly identify stories that makes the heart flutter and brain wiz, and starts conversations that can change the world.

Caleb Harper is the Principal Investigator and Director of the Open Agriculture (Open Ag) Initiative at the MIT Media Lab. Caleb’s research focuses in the areas of control environment design, actuated sensing, control automation and data-driven resource, energy and biologic optimization. His group is developing an open-source agricultural hardware, software and data common with the goal of creating a more agile, transparent and collaborative food system.

Johanna Kellett is a leader in New Product Development at GSK Consumer Healthcare working in the areas of Respiratory Health and Allergy. In her role, she has had the opportunity to contribute to the successful Rx to OTC switches of Flonase and Flonase Sensimist. Her passion and focus is to identify consumer unmet needs, develop innovative solutions in OTC Allergy relief to meet those needs, and make them accessible to consumers throughout the world.

Albert Yu-Min Lin is a research scientist and engineer focused on technology-enabled exploration and crowdsourcing. A National Geographic Emerging Explorer based at the University of California, San Diego, he uses radar, sensors and other tools to push the boundaries of conventional science.

“You don’t need to be a research scientist to come up with the next big idea. At National Geographic, we believe transformational ideas can come from anyone,” said Brendan Ripp, executive vice president, brand partnerships, National Geographic. “Chasing Genius provides a platform for ‘everyday geniuses’ to share ideas, big and small, that can create real impact in the world.”

“Through the Chasing Genius Challenge, we are excited to combine the power and reach of National Geographic and GSK to provide budding geniuses with a platform to explore their curiosities, share their ideas and turn those ideas into catalysts for global change,” said Theresa Agnew, chief marketing officer U.S. at GSK Consumer Healthcare. “Problems around the world — big and small, global and local — can be solved with a single idea from scientists and researchers like us, as well as everyday geniuses like you. And together, our ideas can save lives and change everything.”

Featuring Einstein’s lovers, enemies and fellow scientific luminaries, GENIUS features an all-star cast including Geoffrey Rush (“The Kings Speech,” “Pirates of the Caribbean,” “Shine”) as the celebrated titular scientist, Johnny Flynn (“Clouds of Sils Maria,” “Song One,” “Lovesick”) as Albert in the years before he rose to international acclaim and Emily Watson(“Theory of Everything,” “The Book Thief”) as his second wife — and first cousin — Elsa Einstein. The series premiered globally this April in 171 countries and 43 languages. New episodes of GENIUS air Tuesday nights at 9 PM ET/PT and the two-part season finale will air on June 20th.

Furthering knowledge and understanding of our world has been the core purpose of National Geographic for 129 years, and now we are committed to going deeper, pushing boundaries, going further for our consumers … and reaching over 730 million people around the world in 171 countries and 43 languages every month as we do it. NGP returns 27 percent of our proceeds to the nonprofit National Geographic Society to fund work in the areas of science, exploration, conservation and education. For more information visit natgeotv.com or nationalgeographhic.com, or find us on Facebook, Twitter, Instagram, Google +, YouTube, LinkedIn and Pinterest.

GSK Consumer Healthcare is one of the world’s largest consumer health care companies. Our purpose is to help more people around the world to do more, feel better and live longer with everyday health care products. We have a heritage that goes back over 160 years. We own some of the world’s best loved health care brands, including Sensodyne®, Theraflu®, Excedrin®, Nicorette® and NicoDerm®CQ®, FLONASE®, and TUMS®. These brands are successful in over 100 countries around the world because they all show our passion for quality, guaranteed by science. They are inspired by the real wants and needs of the millions of people who walk into pharmacies, supermarkets and market stalls and go online all over the world every day, and choose us first.

Our goal is to build a global, growing business we call a Fast Moving Consumer Healthcare (FMCH) company, dedicated to everyday health care with all of the scientific expertise and quality guarantees that demands, working at the speed and with the genuine consumer understanding the modern world expects.

The Content Collective is Omnicom Media Group’s entertainment and content division. With offices in Los Angeles, New York and Chicago, The Content Collective taps into a broad network of entertainment production companies, directors, writers and animators to produce breakthrough creative content from large-scale properties like the Grammys to smaller, original programs, covering all budget levels and brand program needs.