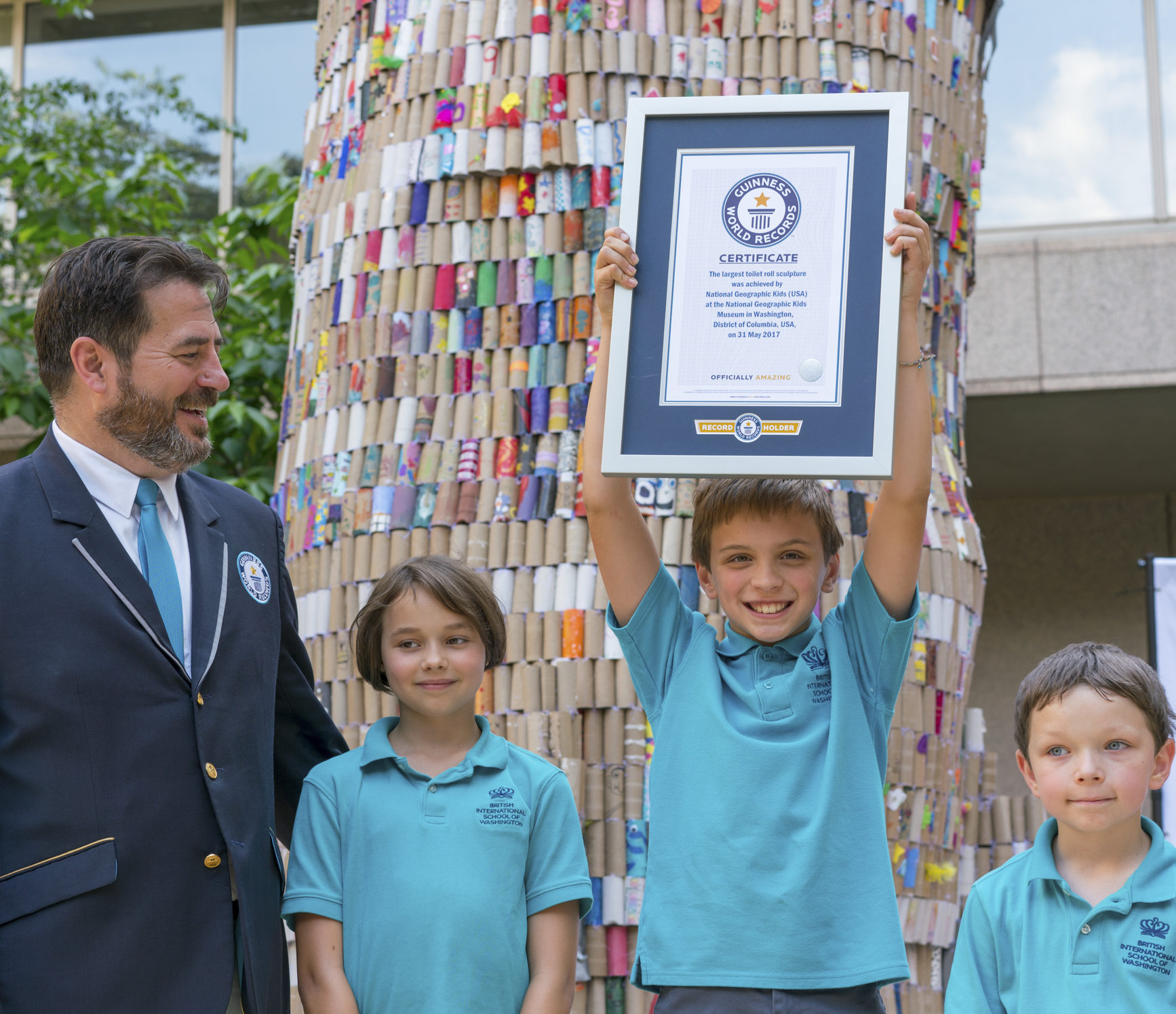 Partnering with Toyota Highlander on the effort, Nat Geo Kids collected submissions from kids around the world this spring. On May 31, the team formally unveiled the record-breaking structure in a ceremony at Nat Geo headquarters in Washington, D.C.

Guinness World Records adjudicator Jimmy Coggins and a team of surveyors from VIKA Capitol assessed the structure and officially ruled it the “Largest Toilet-Paper-Roll Sculpture” based on its gigantic volume of 12.919 cubic meters, or 456.23 cubic feet.

The project aimed to get kids and families excited about STEM, space and upcycling.

“We thought that building a giant sculpture of a rocket, using toilet-paper-roll tubes we usually just throw away, would be a fun way to get conversations started about upcycling and space,” explained Rachel Buchholz, VP and editor-in-chief of National Geographic Kids magazines and digital. “We were completely blown away by the number of kids who participated and added their own creative art to the entries. It was inspiring to see everyone’s contributions come together to form the colossal rocket!”

Students from the British International School of Washington, who had the opportunity to attend the unveiling ceremony, were the largest single donor to the effort with nearly 800 rolls. YouTube personalities Parry Gripp and Hank Green, former U.S. Children’s Poet Laureate J. Patrick Lewis and Major League Soccer stars also contributed their toilet-paper-roll tubes.

Kids can visit the Nat Geo Kids website to learn more about the record, build their own model rocket, take fun space quizzes and explore more space-related content at natgeokids.com/launch-party.

National Geographic Partners LLC (NGP), a joint venture between National Geographic and 21st Century Fox, is committed to bringing the world premium science, adventure and exploration content across an unrivaled portfolio of media assets. NGP combines the global National Geographic television channels (National Geographic Channel, Nat Geo WILD, Nat Geo MUNDO, Nat Geo PEOPLE) with National Geographic’s media and consumer-oriented assets, including National Geographic magazines; National Geographic studios; related digital and social media platforms; books; maps; children’s media; and ancillary activities that include travel, global experiences and events, archival sales, licensing and e-commerce businesses. Furthering knowledge and understanding of our world has been the core purpose of National Geographic for 129 years, and now we are committed to going deeper, pushing boundaries, going further for our consumers … and reaching over 730 million people around the world in 172 countries and 43 languages every month as we do it. NGP returns 27 percent of our proceeds to the nonprofit National Geographic Society to fund work in the areas of science, exploration, conservation and education. For more information, visit natgeotv.com or nationalgeographic.com, or find us on Facebook, Twitter, Instagram, Google+, YouTube, LinkedIn and Pinterest.

Toyota (NYSE: TM), creator of the Prius and the Mirai fuel cell vehicle, is committed to advancing mobility through our Toyota and Lexus brands. Over the past 60 years, we’ve produced more than 30 million cars and trucks in North America, where we operate 14 manufacturing plants (10 in the U.S.) and directly employ more than 44,000 people (more than 34,000 in the U.S.). Our 1,800 North American dealerships (nearly 1,500 in the U.S.) sold almost 2.6 million cars and trucks (2.45 million in the U.S.) in 2016 – and about 85 percent of all Toyota vehicles sold over the past 15 years are still on the road today.