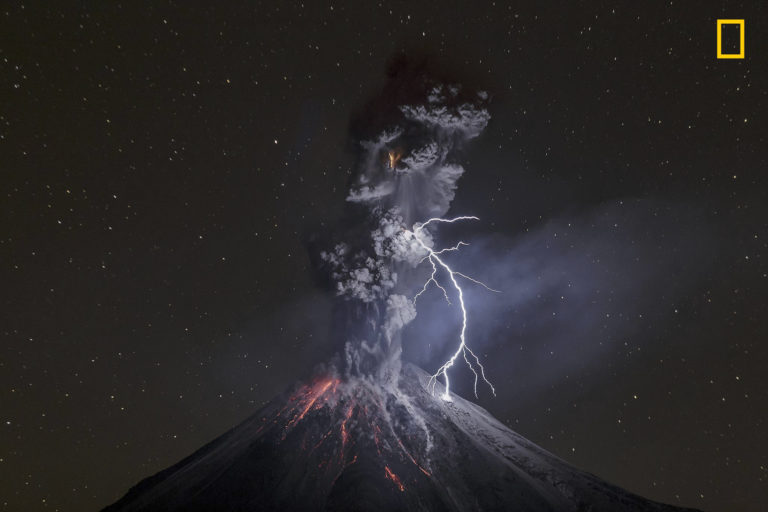 A photograph of an erupting volcano hit by a bolt of lightning has earned Sergio Tapiro Velasco of Mexico the prestigious title of 2017 National Geographic Travel Photographer of the Year. Velasco will receive a 10-day trip for two to the Galápagos Archipelago with National Geographic Expeditions, as well as a prize. Velasco’s incredible photo was selected from over 15,000 entries from participants in more than 30 countries.

Velasco took his grand prize-winning photo, titled “The Power of Nature,” outside Colima, Mexico. For more than a decade, Velasco has been studying and photographing the Volcán de Colima, which is one of the most active volcanos in Latin America and also known as the “Volcano of Fire.” Before he captured this striking photograph, Velasco had been carefully tracking an increase in activity and closely watched the volcano for almost a month.

While shooting on a completely clear night just 12 kilometers away from the crater, Velasco heard a booming noise and witnessed the biggest volcanic lightning he’d ever seen. Until he reviewed the photos he’d taken, Velasco had no idea if he’d actually captured the spectacular event.

“When I looked on the camera display, all I could do was stare,” said Velasco. “What I was watching was impossible to conceive, the image showed those amazing forces of nature interacting on a volcano, while the lightning brightened the whole scene. It’s an impossible photograph and my once in a lifetime shot that shows the power of nature.”

In addition to the grand-prize winner, top photos were selected in each of the three categories. First-, second- and third-place winners were awarded , and , respectively, as well as a subscription to National Geographic Traveler magazine. In addition to winning the grand prize, Velasco’s photo was also chosen as the winner in the Nature category. Norbert Fritz of Hungary took top honors in the Cities category for his photo titled “Levels of Reading,” while “Worship” by F. Dilek Uyar of Turkey won the People category.

All of the winning and honorable mention photos may be viewed at natgeo.com/travelphotocontest.

“The quality of submissions in the 2017 Travel Photographer of the Year contest was wonderfully eclectic,” said Roberts. “I was inspired by the variety of locations and creativity of the photographers in their quest to make compelling images.”

As the grand-prize winner, Velasco will experience a trip of a lifetime with National Geographic Expeditions to the Galápagos Archipelago. Guests have the opportunity to snorkel with exotic fish, sea turtles, penguins and sea lions, visit the Charles Darwin Research Station to see rare giant tortoises and explore the pristine islands by kayak or glass-bottom boat. The trip is provided by National Geographic Expeditions, which offers more than 200 trips across all seven continents.