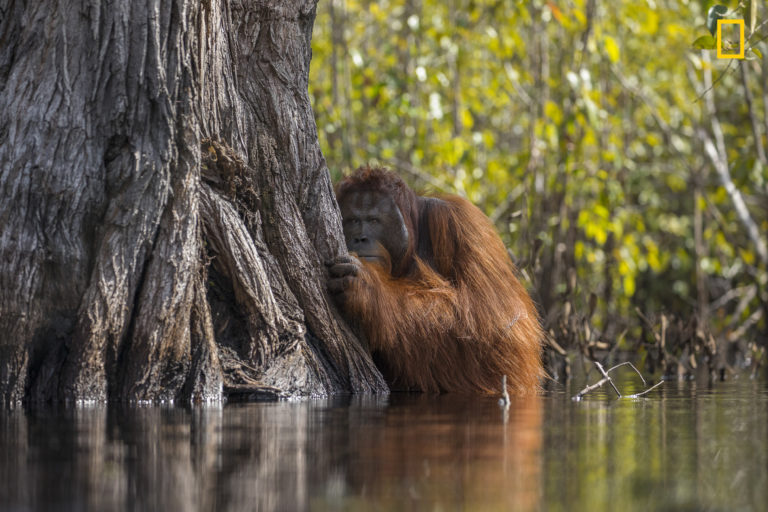 Selected from over 11,000 entries, a wildlife photo of an orangutan crossing a river in Indonesia’s Tanjung Puting National Park has been selected as the grand-prize winner of the 2017 National Geographic Nature Photographer of the Yearcontest. The photo, titled “Face to face in a river in Borneo,” was captured by Jayaprakash Joghee Bojan of Singapore. He has won ,000 and will have his winning image published in an upcoming issue of National Geographic magazine and featured on the @NatGeo Instagram account.

Bojan took the winning photo after waiting patiently in the Sekoyner River in Tanjung Puting National Park in Borneo, Indonesia. After spending several days on a houseboat photographing orangutans in the park, Bojan learned of a location where a male orangutan had crossed the river –­ unusual behavior that he knew he had to capture. After waiting a day and night near the suspected location, a ranger spotted the orangutan the next morning at a spot a few minutes up the river. As they drew near, Bojan decided to get into the water so the boat did not scare the primate. About five feet deep in a river supposedly home to freshwater crocodiles, Bojan captured the photo when the orangutan peeked out from behind a tree to see if the photographer was still there.

Contestants submitted photographs in four categories – Wildlife, Landscape, Aerials and Underwater – through National Geographic’s photography community, Your Shot. All of the winning photos, along with the honorable mentions, may be viewed at natgeo.com/photocontest.

National Geographic Partners LLC (NGP), a joint venture between National Geographic and 21st Century Fox, is committed to bringing the world premium science, adventure and exploration content across an unrivaled portfolio of media assets. NGP combines the global National Geographic television channels (National Geographic Channel, Nat Geo WILD, Nat Geo MUNDO, Nat Geo PEOPLE) with National Geographic’s media and consumer-oriented assets, including National Geographic magazines; National Geographic studios; related digital and social media platforms; books; maps; children’s media; and ancillary activities that include travel, global experiences and events, archival sales, licensing and e-commerce businesses. Furthering knowledge and understanding of our world has been the core purpose of National Geographic for 129 years, and now we are committed to going deeper, pushing boundaries, going further for our consumers … and reaching millions of people around the world in 172 countries and 43 languages every month as we do it. NGP returns 27 percent of our proceeds to the nonprofit National Geographic Society to fund work in the areas of science, exploration, conservation and education. For more information visit natgeotv.com or nationalgeographic.com, or find us on Facebook, Twitter, Instagram, Google+, YouTube, LinkedIn and Pinterest.