On May 22, National Geographic published an exclusive story on the last American slave ship discovered in Alabama.

The remains of the schooner Clotilda, the last vessel to transport enslaved Africans to America’s shores, were discovered in a remote arm of Alabama’s Mobile River following an intensive year-long search by marine archaeologists. The captives who arrived aboard Clotilda were the last of an estimated 388,000 Africans brought in bondage to America between 1609 and 1860. 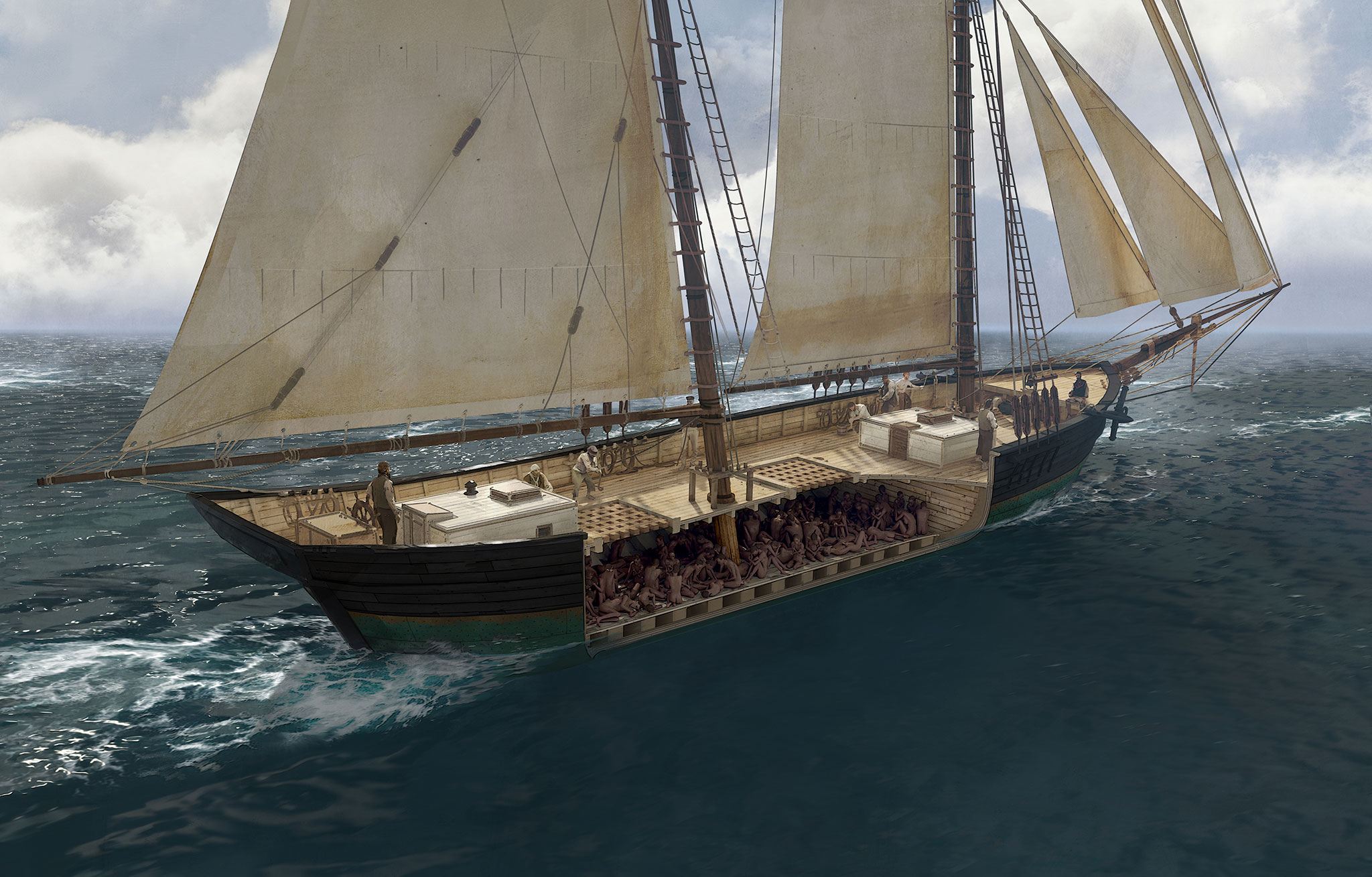 Jason Treat, a senior graphics editor at National Geographic Magazine since 2012, created the illustration of what the Clotilda would have looked like, as seen above.

Jason shared with National Geographic how he and his team created this illustration.

This story has been literally submerged under 18 feet of water for over 150 years, and the best way I know to get people to pay attention is to depict it as accurately and faithfully as possible. Being able to visualize the ordeal these 110 people went through makes it less abstract and more real, and forces us to reckon with the truth. This happened. Now that we know that it happened, what do we do about it?

How did you create the illustration of Clotilda?

Jason: The first thing we did was try to learn everything we could about late 19th century shipbuilding in the gulf area. Jim Delgado, the maritime archaeologist and historian who led the expedition, was a huge resource here. He steered us toward reference imagery for similar ships, period details, and documentation of Clotilda. We then hired Thom Tenery, a really talented artist who creates concept art for Star Wars. We chose Thom because he had extensive work with ships and vessels and because he could create the ship as a 3-D model as a basis for his painting.

Why was a 3-D model helpful?

Jason: The 3-D model allowed us to experiment with a number of compositions before starting to paint, which allowed us a lot of flexibility. It also allows us to re-use and re-stage the model for any additional artwork around the ship that we might create in the future.

What role did archival research play in creating your illustration?

Jason: Accuracy and fidelity to documented factual research is the backbone of everything we do with art and graphics at National Geographic, from the obvious (how big was the ship?) to the picayune (how weathered were the sails?), and this project was no different. Our research led us to consult archival photographs maritime historians, and even insurance documents. These documents gave us details about her measurements and materials. Jim Delgado provided us with photographic references for two similar ships, which allowed us to adapt those forms to what we knew about Clotilda from the insurance documents. Kelsey Nowakowski also helped us nail down important aesthetic details like the color of the hull, the clothes that the crew wore, and details about the sails and rigging.

What did you feel was most important to visually communicate through your illustration of Clotilda?

Jason: I wanted to show the absolutely inhumane conditions that these people had to endure while crossing the Atlantic as captives. They were naked, cramped in a dark hold with little access to light, fresh air, and sanitary facilities. They were cargo.

What was most surprising to you in creating your illustration of Clotilda?

Jason: I’m showing my own ignorance here, but I wasn’t really aware that the slave trade in America had been outlawed by penalty of death in 1807. I hadn’t really separated out the importation of slaves from the Emancipation Proclamation. That’s sobering to me, and has encouraged me to learn more about the subject. When you then understand that this whole episode was sparked by a bet, and that Meaher and Foster were so sure that they would never be held accountable that they risked death to forcibly import these people, it’s truly shocking.

What was the most interesting thing you learned while working on your illustration of the Clotilda?

Jason: Clotilda really was a custom-built ship. The intricacies and the engineering of those customizations are fascinating to me, from the copper sheathing to the countersunk galvanized fasteners. And it’s those customizations that allowed maritime archaeologists to positively identify this wreck as Clotilda.