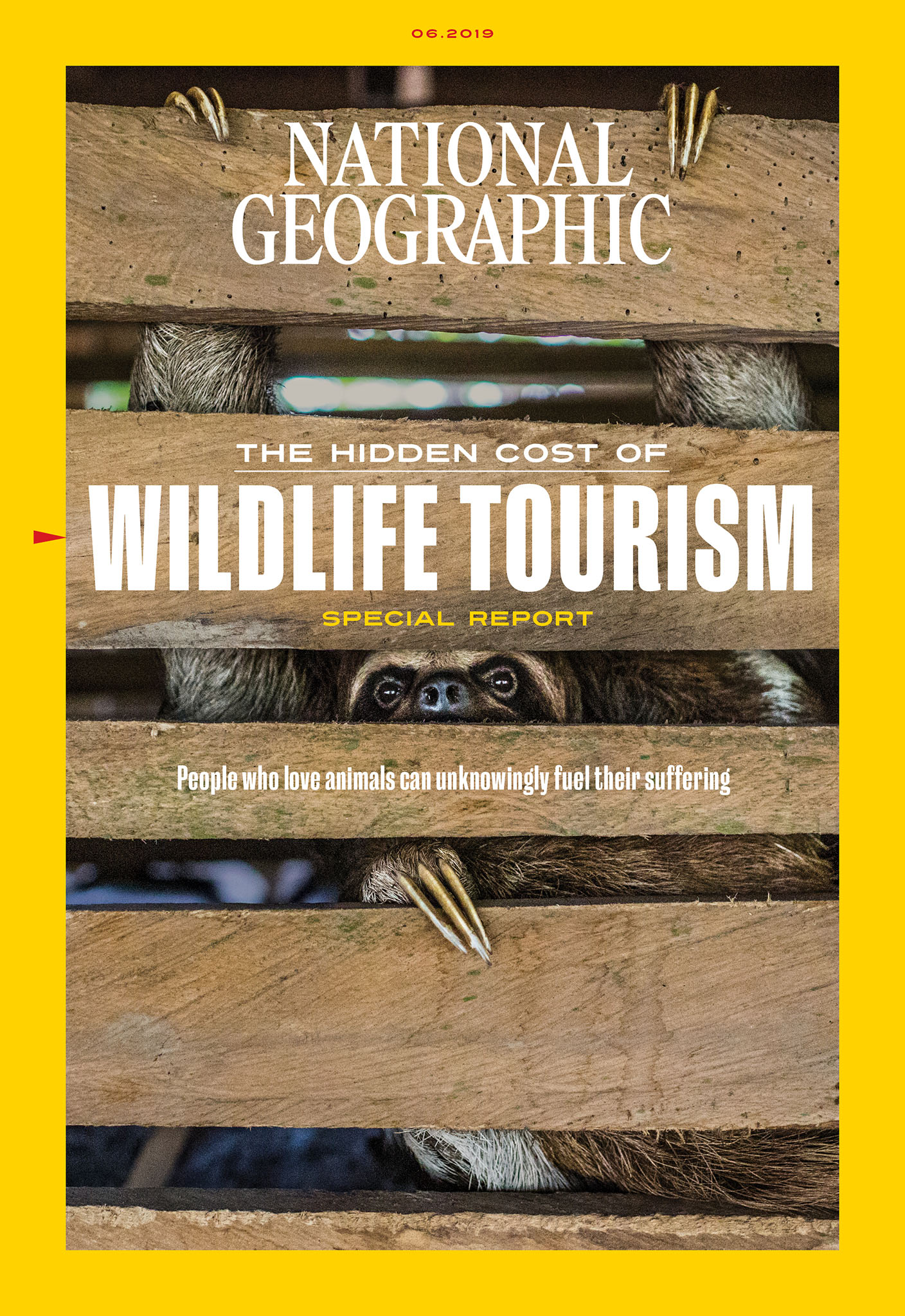 A captive sloth peers out of a cage in Amazonian Peru. Sloths and other animals—elephants, tigers, dolphins—often suffer abuse in the thriving wildlife tourism industry.
Photograph by Kirsten Luce

Today National Geographic has published a special, investigative report months in the making that unveils the unseen consequences of wildlife-based tourism.

The story, “The Hidden Cost of Wildlife Tourism,” is featured on the cover of the June 2019 issue of the magazine and takes readers on a journey through six countries with writer Natasha Daly and photographer Kirsten Luce.

This industry is heavily influenced by tourist demand. If tourists no longer wish to participate in these harmful experiences, it is likely that the industry will follow suit. What we found in our reporting is that people genuinely love animals. We ultimately hope to empower travelers to make choices that will result in treatment that is more humane toward exotic animals by arming them with the necessary information.

Natasha’s investigative feature story on animal suffering in the global wildlife tourism industry took her more than a year to report. Natasha shared with National Geographic how this thought-provoking story came to be.

When did you first start reporting on wildlife tourism?

Natasha: I went to the Amazon in July 2017 to a river town where people illegally catch sloths and keep them in boxes. I spent several weeks in port cities in the Amazon investigating how wild animals are being poached from the jungle for use in the tourism. I then spent the next 18 months in search of wild animals that work as photo props and entertainers for tourists.

How did the idea for the June 2019 cover story come about?

Natasha: Photographer Kirsten Luce and I knew that sloths and other animals are used in the tourism industry all over the world. So after our Amazon story ran, we proposed a broader investigation of wildlife tourism—one that would look at the disconnect between well-meaning tourists who flock to attractions that offer hands-on experiences with animals, and the suffering endured by many of the animals at such attractions. We chose to focus on hotspots: Thailand, Hawaii, Russia, and the Amazon.

What role does social media play in wildlife tourism?

Did you use social media help you at all in your investigation?

Natasha: Instagram was a powerful research tool. Hashtags and location tags made it possible for us to see animal experiences vicariously and then connect with tourists in real time, sometimes joining them on their adventures. Social media underpinned much of our reporting. Kirsten and I couldn’t have told this story without it.

Are the tourists aware of how the animals are mistreated?

Natasha: Getting close to captive wild animals often seems joyful—an innocent, once-in-a-lifetime experience. Most people I met love animals. Many thought that by supporting the attractions they were visiting, they were helping the animals they encountered. They were largely oblivious to the suffering behind the scenes.

Was reporting on this topic difficult to do?

Natasha: Kirsten and I were there to do a job—to report on what we saw. This helped me detach somewhat from the reality I found. But sustained exposure to injured, confined, sickly animals was painful. A couple of times I found myself breaking down over a particularly abused animal. I struggled with guilt over the abuse we witnessed. We could leave and return to our lives. The animals could not.