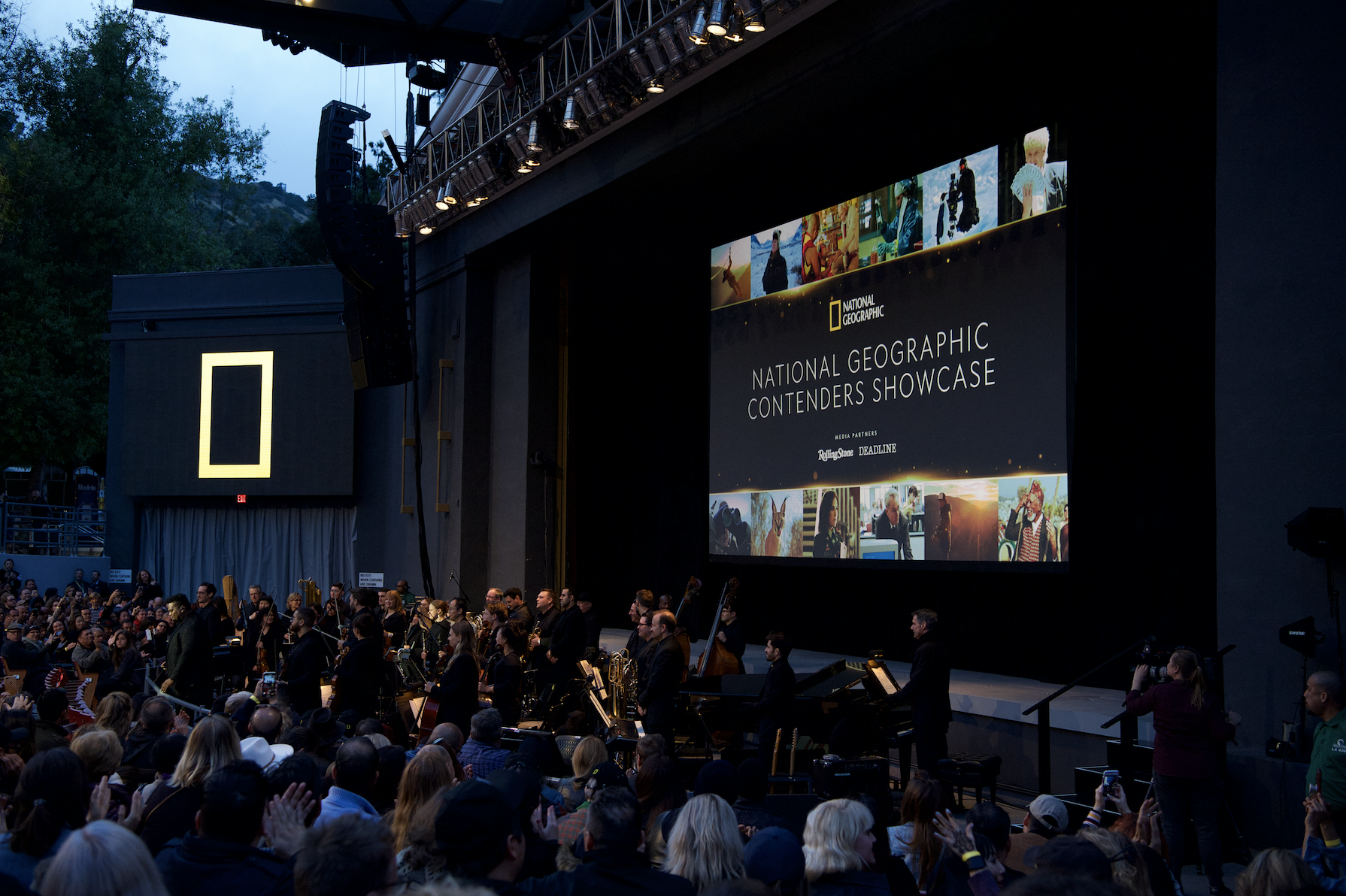 With voting now open for the 2019 Primetime Emmy nominees, talent from across the National Geographic television network has spent the last few weeks on a whirlwind blitz to woo potential voters.

The signature event for voters took place on June 2, as we hosted a first-of-its kind Emmy® For Your Consideration event at The Greek Theater in Los Angeles for more than 2,500 members of the Television Academy, various craft guilds, press, talent, and industry leaders.

The day began with a picnic and showcase where guests interacted with talent from six of our programs ("Free Solo," "The Hot Zone," "Hostile Planet," "Life Below Zero," "The Story of God with Morgan Freeman" and "Valley of the Boom"), and engaged in various activities tied to each.

Once the sun set, everyone moved inside for a 90 minute concert experience featuring Los Angeles area musicians playing selections of the score from "Free Solo," "The Flood" and "Hostile Planet" live to picture. Below are a few highlights from an amazing day!

"Life Below Zero" fans line up for Cryo spa treatments

Visitors got a taste of the freezing harsh temperatures experienced by the cast and crew of the Emmy-winning series "Life Below Zero," with a “Glacial Facial”—a 2-3 minute cryo therapy treatment. Arguably the most popular activation of the day, the long lines gave the series’ talent, producers, cinematographers and editors plenty of time to chat up the incredible work they do that’s earned the series three Emmy awards in the last three years.

"The Hot Zone" composer shares tricks of the trade

Sean Callery, composer of "The Hot Zone," demonstrated the power music has in completing a scene by allowing guests to become the composers themselves – adding music to specific scene from the limited series—now National Geographic’s most-watched series ever. Also on display were the original costumes worn by star Julianna Margulies, and production schematics for the intricate sets created by the series’ production designer.

The natural history series "Hostile Planet" takes viewers to some of the harshest climates on earth to recount epic stories of wildlife survival. Since we couldn’t bring these wild creatures to The Greek, we did the next best thing: PUPPIES! Thousands of guests couldn’t resist getting their hands on some cuddly cuties from Paws for Effect, a local Los Angeles shelter. After being wooed over by the pups, they could then explore a stunning photography exhibit from series, and experience the wild through VR.

On the eve of the two year anniversary of his groundbreaking free solo climb of Yosemite’s El Capitan, Alex Honnold was grounded for a few hours for a book signing of his autobiography “Alone on the Wall.” Seated next to him was composer Marco Beltrami, signing LPs of the documentary’s stunning score, which would kick of the orchestral performance later that evening. Those who braved the long lines were then treated to sound and editing demos for the movie, as well as a chance to experience the climb itself through VR.

Watch some of the highlights from the Emmy Contenders Showcase!

Getting Retro with "Valley of the Boom"

With so many guests crowding The Greek, finding some peace and quiet could prove difficult. Many guests channeled that desire for solace into a quick video game session at the "Valley of the Boom" station, where classic computer games were a hit throughout the night.

Henna for "The Story of God with Morgan Freeman"

For the third season of "The Story of God with Morgan Freeman," the crew traveled more than 70,000 miles to 30 cities—the most ambitious season of the Emmy-winning series yet. As a tie-in to the religious themes of the series, a small group of artisans gave guests henna tattoos. While waiting for their turn, producers also showed off an impressive map of all the locations visited during the latest season.

Once the sun went down, all 2500 guests piled in to the theater for an impressive 90-minute program that showcased an incredible year of National Geographic television. Jamil Smith from media partner Rolling Stone & Deadline welcomed guests before Morgan Freeman and Lori McCreary took the stage for a rousing welcome and celebration of talent behind the scenes. The 30-piece orchestra performed three 20-30 minute pieces from the score of "Free Solo," "The Flood" and "Hostile Planet." In between, talent from all the series featured during the evening took to the stage to introduce clips and trailers from their respective series. The audience stayed firmly in their seats until the very end, and were treated to a surprise vocal performance by Judith Hill.

You can read more about the incredible evening in these three articles: Deadline, Gold Derby, Gold Derby.