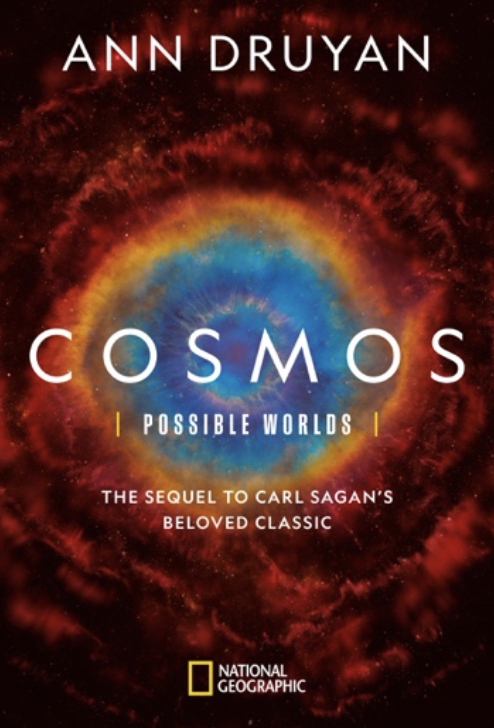 In 1980, Carl Sagan and his wife Ann Druyan co-wrote what would become the most iconic science-based television series in history and its companion, one of the top-selling science books of all time—COSMOS.

The book sold more than 40 million copies worldwide, spent a year on the New York Times bestseller list, and is considered by the Library of Congress to be one of “88 books that shaped America.”

Now, 40 years later, Ann Druyan boldly carries the torch forward with the long-awaited sequel to the book, COSMOS with COSMOS: POSSIBLE WORLDS (National Geographic; February 25, 2020; hardcover; .00), taking readers on further adventures through space and time, to worlds beyond and only now emerging with the advent of new scientific strategies for detection. The book is the companion to her new, third season of COSMOS which will premiere on National Geographic on March 9, 2020.

In an endless quest for knowledge, this breathtaking book travels through 14 billion years of cosmic evolution and into an astonishing future. The show explores some of the most enduring mysteries of our origins and dares to. imagine a thrilling future that is still within our reach. With depth and compassion, Druyan introduces readers to the brave and colorful characters who push beyond the boundaries of knowledge: little-known but monumental visionaries of the past. These unsung heroes include the genius who sent a letter 50 years into the future that guided the successful Apollo mission to the moon; the scientist who made contact with an ancient life-form that uses symbolic language to communicate; and the scientist who, more than 200 years ago, exposed a logical hole in reality that remains unexplained today—despite Einstein’s best efforts.

Through these stories, readers are transported to a hidden place where life may have begun on Earth, to the lost worlds of our ancestors—and, perhaps most exciting, to the possible worlds of our remote descendants.

Ann Druyan is one of the world’s most venerated women in science communication. She has produced some of today’s most acclaimed science-based entertainment, is a partner to NASA and the Planetary Society, works as an interpreter of complex scientific discoveries, and was elected Secretary of the Federation of American Scientists for ten years. She wrote six other New York Times bestselling books with Sagan, including Contact, which was adapted into the Oscar-nominated film of the same name. In 2014, Ann won an Emmy and Peabody award for creating COSMOS: A SPACETIME ODYSSEY for National Geographic, which was the next chapter of the original hit series.

Brimming with wisdom and optimism, COSMOS: POSSIBLE WORLDS takes readers to the further reaches of our universe— and our imaginations.

Ann Druyan is a Peabody and Emmy-award winning writer, producer and director specializing in the communication of science. Druyan served for ten years as the elected Secretary of the Federation of American Scientists and began her writing career with the publication of her first novel, A Famous Broken Heart. She was the Creative Director of NASA’s Voyager Interstellar Message and Program Director of the first solar sail deep space mission, launched on a Russian ICBM in 2005.

She is perhaps most well-known for co-writing, with her late husband, Carl Sagan, the original 1980s, Emmy Award and Peabody Award-winning TV series “Cosmos: A Personal Voyage,” which currently holds the title of the most watched PBS series in television history. The duo also co-wrote six New York Times best-sellers, including Comet, Shadows of Forgotten Ancestors, The Demon Haunted World, Billions & Billions and The Varieties of Scientific Experience. Additionally, Druyan was co-creator and co-producer of the Warner Bros. feature film “Contact,” starring Jodie Foster and directed by Bob Zemeckis.

As Founder and CEO of Cosmos Studios, since 2000, Druyan has produced some of the most acclaimed science-based entertainment including the Emmy nominated “Cosmic Journey: The Voyager Interstellar Mission and Message.” Druyan built on the success of the 1980’s “Cosmos,” by creating “Cosmos: A SpaceTime Odyssey,” for the Fox and National Geographic Television Networks. Ms. Druyan was the lead executive producer, one of the directors and co-writer for which she won the Peabody, Producer’s Guild and Emmy Awards in 2014. The show, which received 13 Emmy nominations, was seen in 181 countries and by more than 135 million people worldwide. A third season, entitled “Cosmos: Possible Worlds,” recently wrapped production and is slated to release on FOX and National Geographic in 2020. Like its predecessors, the show has been helmed under Ms. Druyan’s leadership as Executive Producer, Writer, Director and Creator along with the original creative team of Seth MacFarlane, Brannon Braga, and Jason Clark. Additionally, she wrote the show’s companion book, which will be published by National Geographic and released on February 25, 2020 in advance of the series’ premiere.