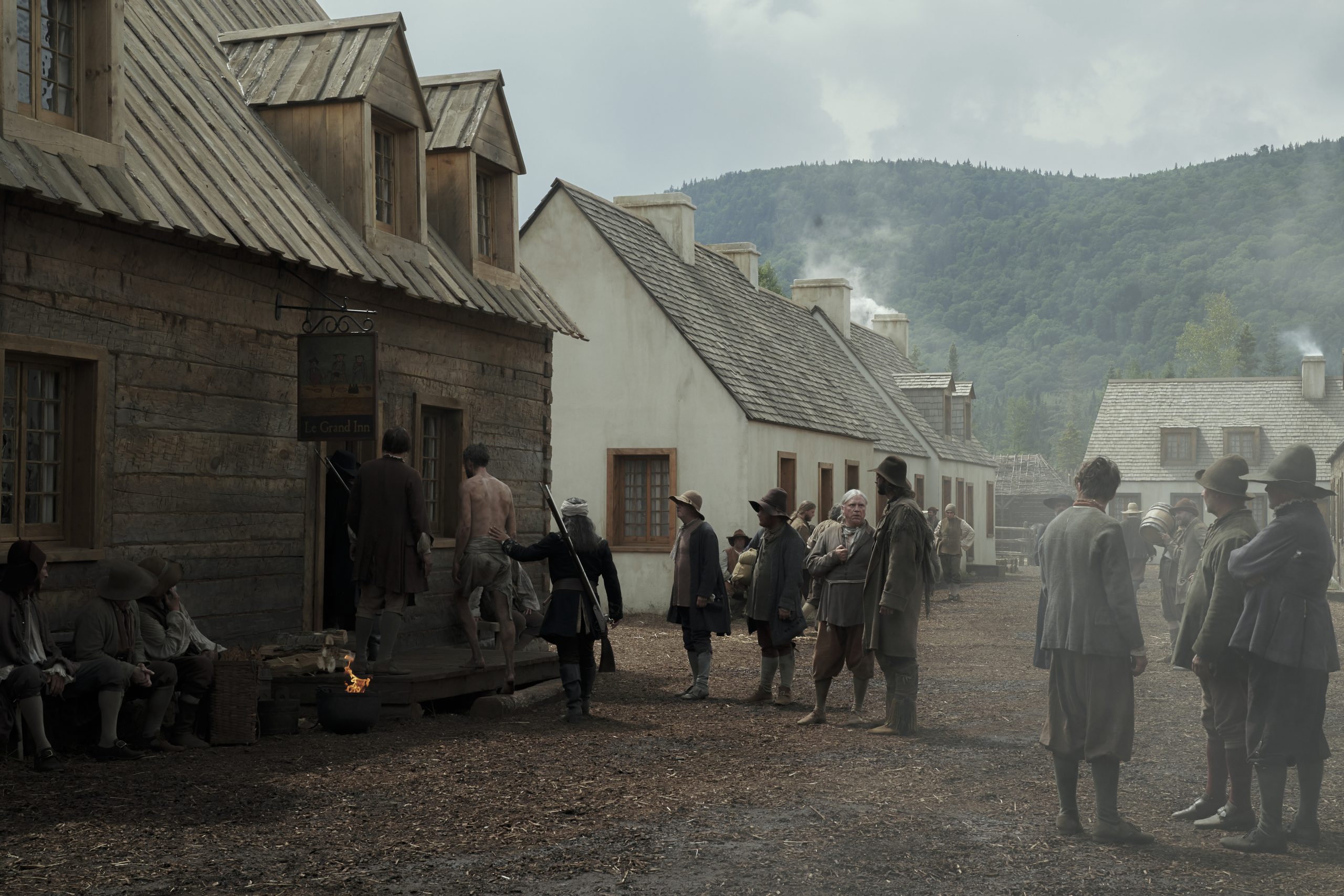 Hamish Goames (Aneurin Barnard) and Yvon (Zahn McClarnon) take the girl and the priest they found at a nearby settlement into Le Grand Inn.
National Geographic/Peter H. Stranks

Based on the New York Times’ bestselling novel by Pulitzer Prize winner Annie Proulx, Barkskins follows a disparate group of outcasts and dreamers as they battle to escape their pasts while navigating the brutal frontier hardships, competing interests, and tangled loyalties at the crossroads of civilization.

The series features a full-scale recreation of Wobik Village, a period-authentic early French-Canadian settlement from the 1600’s in Canada.

Isabelle Guay is the Production Designer and Art Director who created the 17th century world of Barkskins. Previously, Isabelle was a Supervising Art Director on Steven Spielberg’s The Terminal, and she worked on the Oscar-winning film The Revenant, which won the 2016 Art Directors’ Guild for Excellence in Production Design of a Period Film.

Isabelle wanted the town of Wobik to be surrounded by natural beauty – mountains and trees, beautiful sunrises and sunsets. She wanted the location and set designs to be a visual mirror of the mysterious and adventurous themes of the show.

We had to create not only a complete town – everything from a church to a blacksmith’s – but we had to do it in a location which captured the vistas of Nouvelle France, the magnificent forests, the crystal lakes, the looming mountains. The audience must feel the splendor of the land but also the apprehension of the unknown.

Anna Terrazas is the Costume Designer responsible for making the cast members appear period-authentic in every scene. Previously, Anna worked on the Oscar-winning period drama Roma, which was nominated for an Ariel Award for Best Costume Design.

For Barkskins, Anna was very committed to historical accuracy and did extensive research on the various levels of society in 1600’s Canada and in France, from the peasant world to the lives of the bourgeoisie.

At this period, women dressed in many layers: shifts, stays, petticoats, skirts, aprons and dresses which you had to lift to prevent getting dirt from the muddy streets on the hems. These weren’t people who had large closets. Any item of clothing that arrived from Europe would be kept for the wearer’s life. So, we gave all of our costumes a patina, patches, signs of years of wear.

Barkskins explores what it was like when French settles first began to settle in North America, trying to recreate French society in the woods. Elwood Reid, the creator, writer and Executive Producer of Barkskins, believed that it was important to film this story where it actually took place.

We built Wobik, a settlers’ village of 23 buildings – from the Grand Inn to the church – surrounded by a palisade in the middle of the forest; we built a Wendat village with its longhouses; a chateau which belongs to Claude Trepagny. Many key members of our production team are Quebecois – Isabelle Guay was fierce about accurately reflecting the daily lives of her ancestors. Anna Terrazas was equally as dedicated. Wobik and the Wendat village have become characters in themselves.

Check out a behind the scenes look at Barkskins below.