Series Includes Music from an Eclectic and Diverse Group of Hometown Chicago Musicians Including Jamila Woods, JC Brooks & The Uptown Sound, Devil in a Woodpile and Original Music Compositions from Will Miller and his band Resavoir

[Director Steve] James isn’t telling the story of an American city, but THE American city; Chicago’s problems are America’s problems, from our divisions to our strengths. 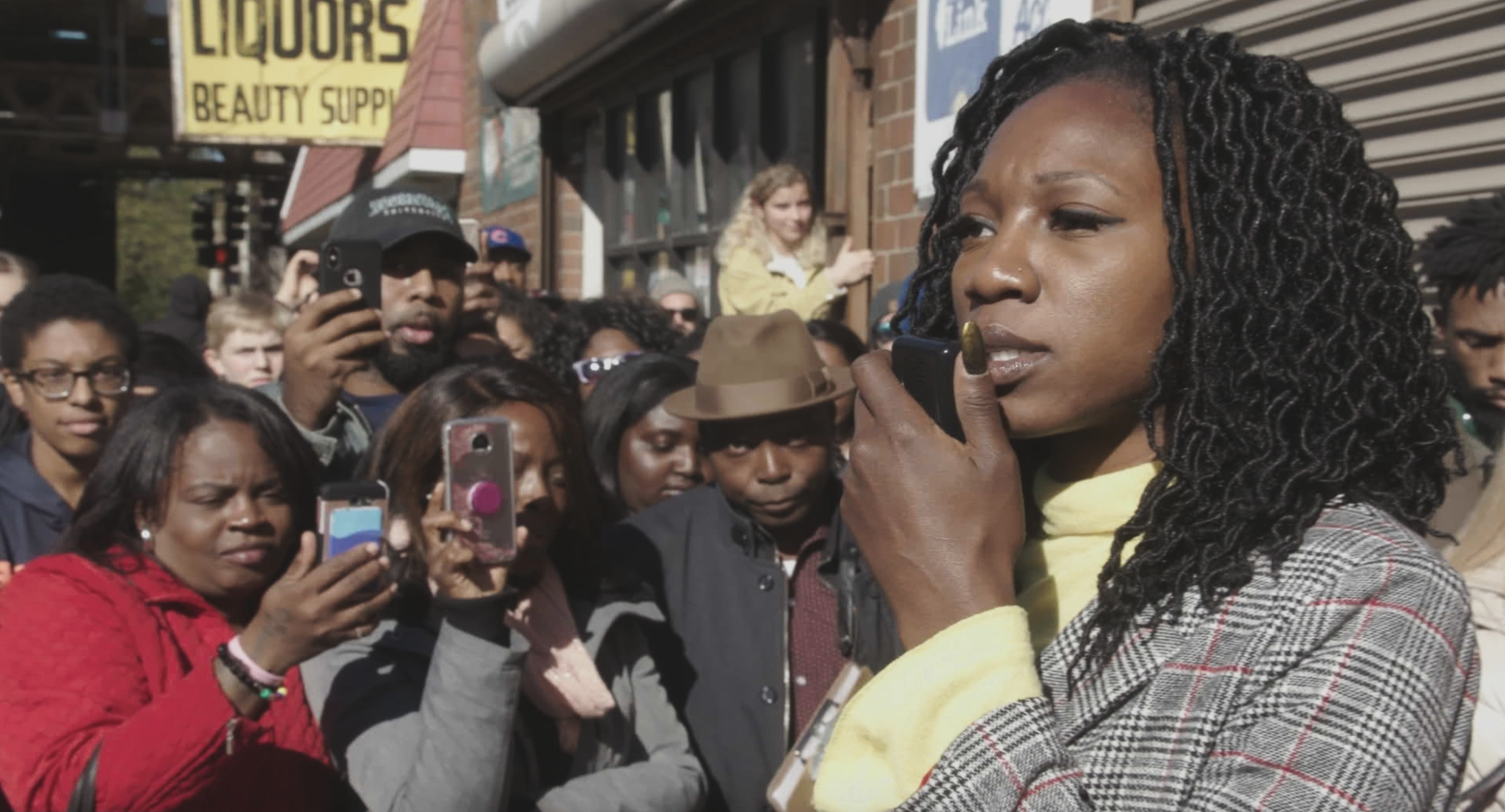 National Geographic today announced the acquisition of CITY SO REAL, an official Indie Episodic selection at the 2020 Sundance Film Festival, set to premiere on the network this fall. From twice Academy Award®-nominated filmmaker Steve James (America to Me, Hoop Dreams) and his longtime producing partner Zak Piper (Life Itself, The Interrupters), the fascinating and complex portrait of contemporary Chicago delivers a deep, multifaceted look into the soul of a quintessentially American city, set against the backdrop of its history-making 2019 mayoral election.

Following its Sundance world premiere, Paste Magazine declared: “There is perhaps no film that exudes the collective essence of Steve James’s body of work as much as his latest…. CITY SO REAL takes a sweeping look at the public and private lives of Chicago, of the political machine and of everyday sidewalk stories, of life at work and sometimes at home… exploring racial and cultural contradictions that often lurk just below the surface.”

From Participant and Kartemquin Films, CITY SO REAL’s rich and intricate story was originally conceived as four one-hour episodes, but the premiere on National Geographic will exclusively feature an epic fifth episode that follows the COVID-19 pandemic and social uprising following George Floyd’s death. The announcement was made by National Geographic Global Television Networks President Courteney Monroe during the network’s session at the Summer CTAM press tour.

The series begins in the haze of mid-summer 2018, as Mayor Rahm Emanuel, embroiled in accusations of a cover-up related to the police shooting of an African-American teenager, Laquan McDonald, shocks the city by announcing he won’t seek reelection. An unprecedented 21 candidates emerge in a diverse and crowded field as they engage in a no-holds-barred battle for a chance to shape the city’s uncertain future.

From the summer of 2018 through the spring of 2019, James, Piper, as well as James’ son, filmmaker Jackson James, and a diverse team followed the historic, often contentious mayoral election. Scenes from the streets, luxury high-rises, barbershops, campaign offices and nightclubs are skillfully juxtaposed by editors David E. Simpson (America to Me) and James to create a mosaic of life in the Midwest’s most racially, culturally and economically diverse city.

In candid interviews with residents throughout the city, the series captures Chicago’s indomitable spirit as well as its seemingly insurmountable challenges. CITY SO REAL is a gritty and loving depiction of a quintessentially American city that is at once fiercely unique and a microcosm of the nation ⎯ and our world ⎯ as a whole.

“Chicago is an enormous and enormously diverse urban environment that wrestles with issues of race and segregation and violence, which is the story of America today,” says James. “You see evidence of that everywhere in the series from the barbershop conversations to the people watching the debate. All cities have their boosters, but there’s something unique about the passionate love and civic pride Chicagoans have for their city. The documentary captures the beauty and the richness of a very complex city, while also showing how divided it can be.”

“The portrait of Chicago through Steve’s unique storytelling lens is one that will powerfully resonate across the country and elsewhere,” said Diane Weyermann, Chief Content Officer for Participant. “We are thrilled to be working with our friends at National Geographic to share this deeply human, nuanced character-driven series, which boldly weaves together an unflinching and illuminating story of contemporary America.”

“We are thrilled to be partnering with the extraordinary Steve James and the team from Participant on CITY SO REAL, a profound and intimate portrait of life in every American city that could not be more timely,” said Monroe. “We look forward to showcasing this ambitious and impactful documentary series, including Steve’s newly filmed fifth hour capturing the pandemic and the civil unrest gripping our nation.”

The team employed a creative filmmaking approach, exposing disparate personalities and campaign styles of the candidates, along with Chicago’s lively, visceral, and human personality. The beauty and richness of a complex city made it easy to leverage Chicago’s abundant musical history woven in through existing tracks from artists with roots in the city to pay homage to the music scene with original compositions by Will Miller and his band Resavoir, resulting in an infectious soundtrack. Additional music includes an eclectic and diverse group of musicians Including Jamila Woods, JC Brooks & The Uptown Sound and Devil in a Woodpile.

Labeling ‘City So Real’ as the Chicago self-portrait of the new century is a start. The finish, as James reminds us throughout, remains up to those who rule, live and die here.

For more information, visit www.natgeotv.com or our press site www.natgeotvpressroom.com, or follow us on Twitter using @NatGeoPR.

Director, Producer, Cinematographer & Editor Steve James is a two-time Academy Award nominee who has earned four Directors Guild of America (DGA) Award nominations, winning for 1994’s Hoop Dreams. That film marked his first Oscar nomination (Best Film Editing), as well as an Independent Spirit Award win, and James received his second Oscar nod (Best Documentary Feature) for 2016’s Abacus: Small Enough to Jail. The latter film was named one of the National Board of Review’s “Top 5 Documentaries of the Year” and won Best Political Documentary at the Critics’ Choice Awards. James’ other notable credits include Stevie, an Independent Spirit Award nominee and Sundance prize winner; The Interrupters, which won an Emmy, Independent Spirit Award and the duPont-Columbia Journalism Award; and the Roger Ebert biography Life Itself, named best documentary by the National Board of Review and the Producers Guild of America (PGA), as well as winning an Emmy winner for Best Editing. The director’s Starz docuseries America to Me premiered at Sundance and was one of the most acclaimed TV shows of 2018.

Founded by Chairman Jeff Skoll and under the leadership of CEO David Linde, Participant (www.participant.com) combines the power of a good story well told with real world impact and awareness around today’s most vital issues. Through its worldwide network of traditional and digital distribution, aligned with partnerships with key non-profit and NGO organizations, Participant speaks directly to the rise of today’s “conscious consumer,” representing the well over 2 billion consumers compelled to make meaningful content a priority focus.

As an industry content leader, Participant annually produces up to six narrative feature films, five documentary films, three episodic television series, and more than 30 hours of digital short form programming, through its digital subsidiary SoulPancake. Participant’s more than 100 films have collectively earned 74 Academy Award® nominations and 19 wins, including Best Picture for Spotlight and Green Book, Best Documentary Feature for An Inconvenient Truth, The Cove, CITIZENFOUR and American Factory, and Best Foreign Language Film for Roma and A Fantastic Woman. Participant’s digital division, SoulPancake (www.soulpancake.com), is an award-winning provider of thought-provoking, joyful, and uplifting content that reaches an audience of more than 9 million fans. Follow Participant on Twitter (@Participant) and on Facebook and Instagram. Follow SoulPancake on Twitter (@soulpancake) and on Facebook and Instagram.

Sparking democracy through documentary since 1966, Kartemquin (www.kartemquin.com) is a collaborative center empowering filmmakers who create documentaries that foster a more engaged and just society. The organization’s films have received four Academy Award ® nominations, and won six Emmys® and three Peabody Awards, among several more major prizes, including multiple Independent Spirit, IDA, PGA and DGA awards, and duPont-Columbia and Robert F. Kennedy journalism awards. In 2019, Kartemquin was honored with an Institutional Peabody Award for "its commitment to unflinching documentary filmmaking and telling an American history rooted in social justice and the stories of the marginalized." Recognized as a leading advocate for independent public media, Kartemquin has helped hundreds of artists via its filmmaker development programs and championing of the documentary field.