Throughout its 133-year history, National Geographic has understood the power of storytelling and how it can help spark compassion and inspire change. In celebration of Black History Month, which is recognized in the United States in February, National Geographic has a variety of content offerings celebrating the history, heritage, accomplishments, culture, and contributions of Black Americans.

This one-hour documentary special from National Geographic and ESPN’s The Undefeated traces the raw and uncensored journey of the Civil Rights Movement through the eyes of the heroes who marched for justice and equality in the 1960s, and the experiences of those on the front lines of the current fight for racial equality.

Premieres on National Geographic on Thursday, February 18, at 10/9c and available next day on Hulu.

Genius is an Emmy-winning anthology series that dramatizes the fascinating stories of the world’s most brilliant innovators, exploring their extraordinary achievements along with their volatile, passionate and complex personal relationships. The third season will explore Aretha Franklin’s musical genius, incomparable career and the immeasurable impact and lasting influence she has had on music and culture around the world. Franklin was a gospel sensation, outspoken civil rights champion and one of the most gifted singers of her generation. She will be portrayed by Oscar-nominated Cynthia Erivo, and Emmy-winning Courtney B. Vance will play Aretha’s father, C.L. Franklin.

Premieres on National Geographic on March 21, 2021

Nat Geo KIDS has a collection of profiles on African-American Heroes, where you can learn more about John Lewis, Katherine Johnson, George Washington Carver, and Bessie Coleman.

Also check out the explainer on the origins of Black History Month, which children and adults alike can learn from! 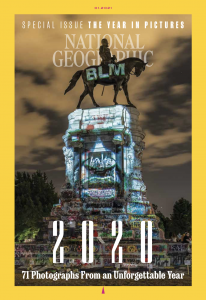 On February 25, tune in to a special Facebook Live on the @natgeo account with an esteemed group of Nat Geo photographers. One of the featured participants is Kris Graves, who made the photo on the cover of the January 2021 issue of National Geographic.

Every Monday, the @natgeo Twitter account will be “passing the mic” to another voice from within the Nat Geo community to share a bit of history with the account’s over 25 million followers. First up was Johns Hopkins University professor Martha S. Jones, who wrote about Amanda Gorman’s inaugural poem and Black poets in history.

On the @natgeoyourshot Instagram account, followers will be invited to participate in a Hashtag Challenge, hosted by photographer Elias Williams and inspired by his work from Africatown. Williams will share what community means to him personally and the importance of taking pride in where you come from, particularly in the Black community. For the challenge, followers will be asked to submit images of what community pride and joy looks like where they live, using the hashtag #NatGeoCommunityPride.

Throughout February, viewers can watch a curated playlist of free titles on Nat Geo TV to celebrate Black History Month.

Featured content includes Rise Up: The Legacy of Nat Turner, Martin Luther King Jr.: Marked Man, and The Story of Us with Morgan Freeman.