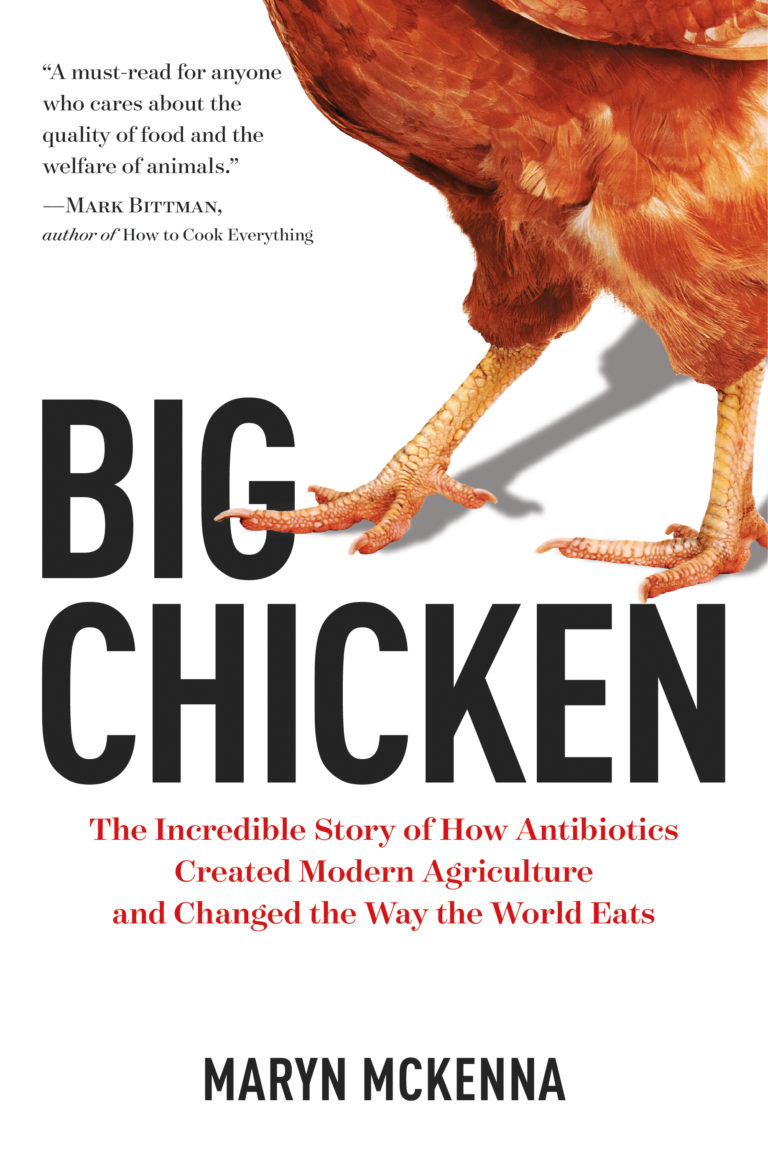 Chicken is the world’s most popular meat, but its path to our plates winds through a dark and fascinating history. BIG CHICKEN: The Incredible Story of How Antibiotics Created Modern Agriculture and Changed the Way the World Eats (National Geographic Books; on sale September 12th 2017; Hardcover ISBN: 978-1-4262-1766-1; .00; eBook ISBN: 978-1-4262-1767-8; .99) explores the “backyard bird’s” meteoric rise from local delicacy to global commodity, and how it paved the way for a stunning transformation of farming worldwide.

Award-winning journalist (New York Times Magazine, The Atlantic, Wired, Scientific American), critically acclaimed author (SUPERBUG and BEATING BACK THE DEVIL), and TED speaker with more than 1.5 million views for her talk “What do we do when antibiotics don’t work any more,” Maryn McKenna takes readers on an extraordinary journey from farm to lab to restaurant, and into the kitchens of everyday Americans and families around the globe.

Drawing on more than 100 interviews in the United States and Europe with farmers, lawyers, historians, microbiologists, politicians and chefs — and more than 1,000 pieces of research, many of them lost for decades until she uncovered them — McKenna pieces together the parallel, intertwined stories of the achievement of “growth promoter” antibiotics and the rise of the modern poultry industry. In a tour de force of scientific and cultural history, McKenna finds the connections between flavor and nutrition, genetics and history, labor and the role of women, and pollution and politics. Reaching back to the earliest days of the antibiotic era, she traces the unintended consequences of the post-World War II drive to feed the world inexpensively by producing meat as quickly as possible — and how those good intentions created a worldwide epidemic of drug-resistant infections that have defeated almost every antibiotic we have.

McKenna is an intrepid researcher and an expert interpreter of science; she uncovers the true origin of the chicken nugget, the tale of the “Chicken of Tomorrow” contest, and an astounding episode in the 1960s in which manufacturers added antibiotics to meat to extend its shelf life for months. McKenna also loves food. Describing the French street-market chicken that forever changed her experience of poultry, she writes: “Burnished and herbal, salty and slightly burnt, [the aroma] has so much heft that it feels physical, like an arm slid around your shoulders to urge you to move a little faster.”

McKenna writes with equal sympathy about activists for heritage animals who hope never to kill a chicken again and farmers proud of their costly investments growing chicken safely, consistently and more cheaply than ever before. She also identifies the earliest stirrings of an animal welfare movement that may change poultry production forever, and the surprising participation of big food companies that plan to carve out new markets by returning to old ways.

BIG CHICKEN is timely, explaining policy changes that occurred at the United Nations in 2016 and at the U.S. Food and Drug Administration just this year; and it is also urgent, warning of the vast farm antibiotic use that looms in the economies of the developing world. Bringing us on an extraordinary journey from the vast poultry farms of the United States to laboratories, kitchens and sidewalk markets around the world, McKenna reveals how economic, political and cultural forces converged to make America’s favorite meat a hidden danger—and how companies, activists, farmers and chefs are carving a path back to better, safer food.

Maryn McKenna is an award-winning journalist and the author of two critically acclaimed books, Superbug and Beating Back the Devil. She writes for the New York Times Magazine, The Atlantic, Newsweek, NPR, Wired, National Geographic, Scientific American, Slate,Nature and others, and is a senior fellow of the Schuster Institute for Investigative Journalism at Brandeis University and a journalism instructor at the University of Georgia.

National Geographic Partners LLC (NGP), a joint venture between National Geographic and 21st Century Fox, is committed to bringing the world premium science, adventure and exploration content across an unrivaled portfolio of media assets. NGP combines the global National Geographic television channels (National Geographic Channel, Nat Geo WILD, Nat Geo MUNDO, Nat Geo PEOPLE) with National Geographic’s media and consumer-oriented assets, including National Geographic magazines; National Geographic studios; related digital and social media platforms; books; maps; children’s media; and ancillary activities that include travel, global experiences and events, archival sales, licensing and e-commerce businesses. Furthering knowledge and understanding of our world has been the core purpose of National Geographic for 129 years, and now we are committed to going deeper, pushing boundaries, going further for our consumers … and reaching over 760 million people around the world in 172 countries and 43 languages every month as we do it. NGP returns 27 percent of our proceeds to the nonprofit National Geographic Society to fund work in the areas of science, exploration, conservation and education. For more information visit natgeotv.com or nationalgeographic.com, or find us on Facebook, Twitter, Instagram, Google+, YouTube, LinkedIn and Pinterest.