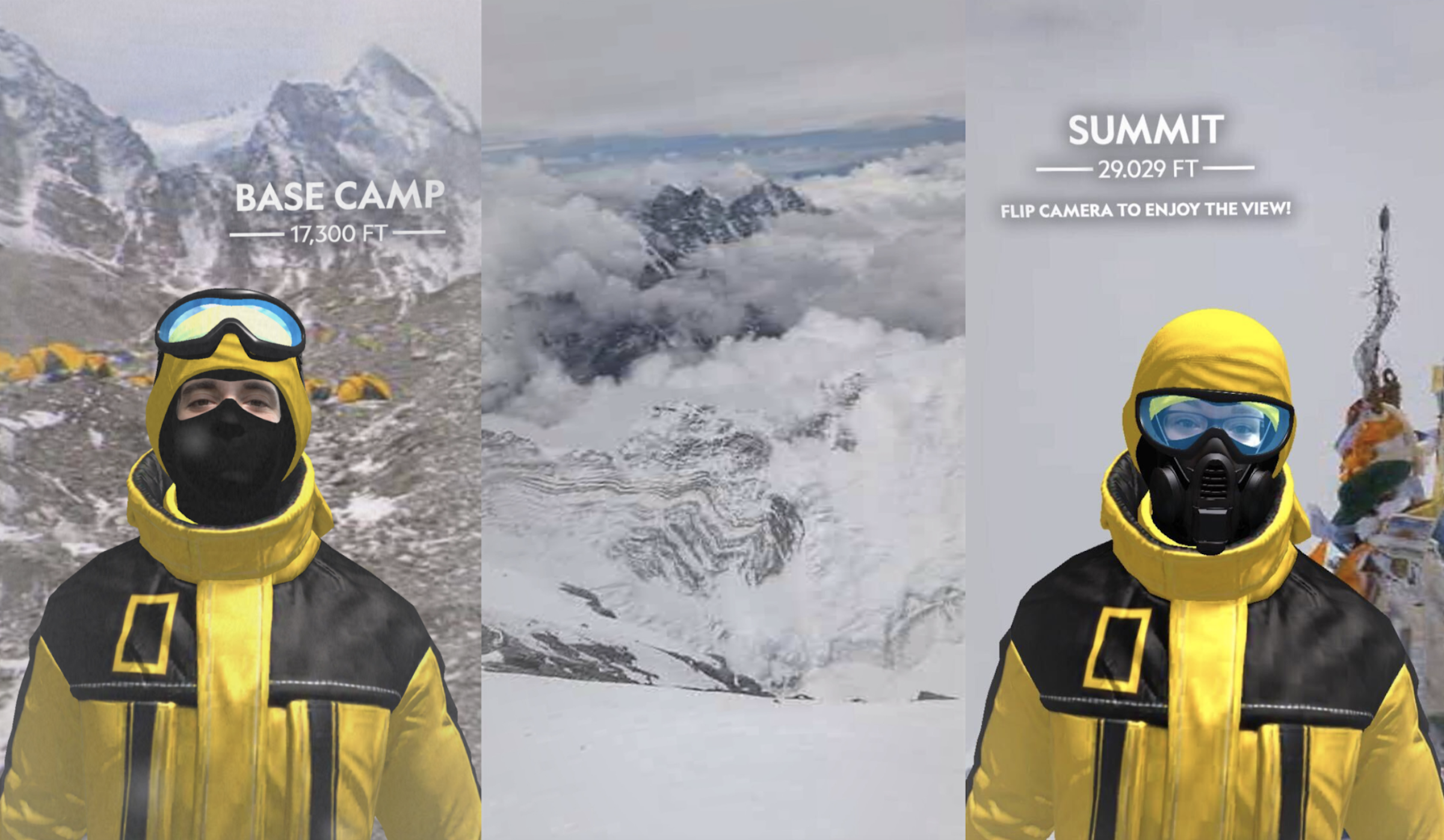 Still images captured from National Geographic’s augmented-reality experience on Instagram allowing viewers to dress as Everest climbers and travel up the mountain. When users launch the interactive, they will find themselves at an altitude of 15,800 feet near the base of the mountain.

As the summer continues and travel seems to be less and less of an option for many people, National Geographic has launched an augmented-reality experience on Instagram allowing users to climb Mount Everest, with the goal of helping satisfy the wanderlust people are feeling as the pandemic continues.

This augmented-reality interactive experience allows users to dress as an Everest climber and travel up the mountain with the National Geographic and Rolex Perpetual Planet Everest Expedition, which was the most comprehensive single scientific expedition to the mountain in history and focused on expanding our understanding of climate change at extreme elevations. The expedition team captured the 360 video that will now allow people from all over the world to virtually climb the mountain. You can read more about the expedition and see the 360 video in the July issue of National Geographic magazine, a single topic issue on Everest.

National Geographic and Rolex have partnered for more than six decades to support scientific understanding, enable groundbreaking expeditions, and deploy new technologies that fill critical knowledge gaps as part of our shared commitment to a Perpetual Planet.

The Everest AR experience on Instagram, the latest result of this partnership, is the first portal 360 AR experience on Instagram’s Spark AR platform, which allows users to jump between different 360 degree views at various spots on the mountain. Viewers will be able to see their own breath as well as take and share selfies from the summit as they experience conditions that explorers face when scaling the mountain. Viewers will see scientists at work installing the world’s highest weather station and collecting the highest ice core, two critical accomplishments that will provide new insights into the impacts of climate change on Everest and other high mountains.

Rather than utilizing AR to transform your face as is commonly done, we pushed to create an entire environment using 360s and building a full bodied model of an Everest climber that reacts to your face and head movements. To keep the experience realistic, it was also important that the filter could evolve. We made sure both the weather and your climbing outfit intensify as you gain altitude on the mountain.

When viewers launch the interactive, they will find themselves at an altitude of 15,800 feet near the base of the mountain dressed as an Everest climber. Viewers can move their camera or swipe with their finger to look around the 360 panoramas, while selecting various altitudes to travel up the mountain with the expedition. The gear they are wearing will change as they gain altitude, and eventually they will find themselves wearing goggles and a breathing apparatus as the air becomes thinner.

Once viewers reach the balcony, just 1,400 feet below the summit, they will see the team installing the world’s highest weather station, which is one of five they installed on the mountain that are transmitting near-real time data on weather conditions at these high elevations. When viewers reach the summit, they can flip their camera around to the front-facing camera to enjoy the authentic panoramic view.

This 360 AR experience is the latest tool National Geographic is using to bring the epic, storied mountain to life for audiences around the world. Mount Everest is also the subject of this month’s magazine issue, a single-topic issue on Everest, as well as two television specials, “Lost on Everest” and “Expedition Everest.”